I got quite an interesting question from a reader this week related to a very specialized type of cartridge introduced some years ago. He had been listening to some of his hunting buddies and one of them had mentioned a .22 caliber varmint cartridge designed to be fired from .30 caliber rifles.

What he had heard about was the Remington Accelerator, originally introduced in 1977 and offered in .30-30, .308 and .30-06. Remington was able to do this by fitting a .22 caliber bullet into a .30 caliber sabot and seating the sabot in the mouth of the cartridge case. It was a great idea…it just didn’t work that well.

When the cartridge first appeared on the shelves, the big marketing push was for giving the hunter the ability to have a high speed varmint gun without having to buy a specific varmint rifle. Imagine a .30-30 that fired a .22 bullet up to 4000 foot per second! A lot of shooters took notice.

When you fired an Accelerator round the sabot holding the .22 caliber bullet in the mouth of the cartridge case zipped down the barrel and then dropped off right as it exited the muzzle. The .22 caliber projectile was spinning due to the sabot biting into the rifling and streaked on its way to the target.

In theory, this sounded like a good thing. In reality, the .22 caliber bullet wasn’t stabilized well enough to fly true. I think the bullet tumbled after 50 to 60 yards and accuracy really suffered.

My first “field test” with Accelerator ammunition was in a Model 94 Winchester .30-30. I fived my first five rounds at 25 yards. The group was in the bullseye and probably could have been covered with a quarter. Not bad.

I moved my target out to 100 yards and fired five more rounds. I never touched that target. A buddy who was with me said he thought he had seen dirt kick up off to the side of the target on a couple of shots.

I brought the target back to 50 yards and fired five more rounds. I hit the target twice, but the holes in the paper weren’t even close. My buddy had been watching more carefully when I fired these rounds. He noted three rounds had hit the ground 100 yards or more downrange. That’s when my “tumbling theory” set in.

Lots of shooters around the country had similar experiences with accuracy. Another problem shooters found was that the Accelerator sabots, being plastic, left lots of residue in the bore. This was difficult to clean out of a rifle barrel that had fired more than a few rounds. The fate of the Accelerator was almost sealed.

The next thing to happen was the anti-gun zealots jumped on the bandwagon and labeled the Accelerator cartridges as “assassin” bullets because there would be no rifling marks on the .22 caliber bullet that would allow you to trace back a bullet to the rifle that fired it.

Remington ultimately yielded to government pressure and stopped making the accelerators in .308 and .30-06. The reasoning was that .308 and .30-06 could be fired from “military” semi-auto and fully automatic rifles. The .30-30 was not considered to be as deadly and less likely to be used in a violent crime so they were still made. Don’t ask me to explain their logic…it gives me headaches!

You can still find Accelerator rounds sitting on the self occasionally. My suggestion is to let them stay sitting there, unless you just have a need to do some “field testing” yourself.

Great question! Those are the types of question that pique the interest of a lot of shooters and allow for some good firearms history to be told. The only thing else I had to do was watch a blizzard.

Saathoff picks up first win of the season

Johhny Saathoff picked up his first win of the season Friday night at Beatrice Speedway.

NWU President Darrin Good cites the NCAA's mandates, particularly the rigorous testing of athletes, as one reason for postponement. 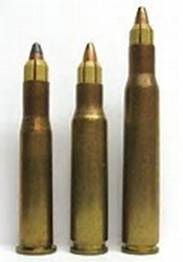 You can see the plastic sabot that held the .22 caliber bullet in the mouth of the cartridge case. Instead of pushing a 150 grain bullet down the barrel, the Accelerator’s bullet was 55 grains, making it travel at two to three times the velocity of a standard round. Remington initially made the Accelerator in (L-R) .30-30, .308 and .30-06. It was a good idea, but it never lived up to what shooters were really looking for.