I attended an Outdoor Expo this last weekend and presented a couple seminars on how to be a better landscape and wildlife photographer. As is always the case in events like this, I get involved in a lot of diverse conversations related to the outdoors.

One of the conversations I got into regarded snow goose hunting. The Light Goose Conservation Order, or spring snow goose season, opened February 10th and runs until April 15th here in the East Zone and February 10th to April 5th in the Rainwater Basin Zone.

There are three species of geese you can hunt during this season: the snow goose, blue goose and the Ross’ Goose. Several of the people in these conversations asked about the Ross’ Goose. The main question was how to tell it from other geese.

The Ross’s Goose is the runt of these goose species. It looks very much like a snow goose! It has white feathers that cover most for the body with black wingtips. The most noticeable difference is that the Ross’ goose has a shorter neck, stubbier bill and only a little bit bigger than a mallard duck. In flight, they are almost always in a tight “V” formation.

This “miniture” version of a snow goose has been an anomaly since it was first discovered by Europeans and thought to be a different bird as early as 1770. However, it was not defined in scientific terms and classified until 1861. We did not know the whereabouts of its nesting grounds until 1938. We did not know that the Ross’ Goose had a rare blue phase until 1979. In many cases we mistakenly assumed it was just a little snow goose.

Their nesting grounds are in the high Arctic. Nest sites are often on an island or shore of a tundra lake. It is generally in some low growing vegetation. Research has shown that a Ross’ Goose will use the same nest site for more than one season. The nest is made from whatever can be gathered nearby; twigs, grasses, moss and lined with down. Females build the nest in March or April and the first egg is laid soon after.

A nest will average four eggs per clutch. The eggs are dull white at first but take on dark stains from nesting material that creates a perfect camouflage for the area. The female does all the incubating and the eggs will begin to hatch in 21-23 days. Both parents tend to the young who leave the nest in a day or so and follow their parents to the water. Young birds are able to fly in 40-45 days.

The diet for Ross’ geese is primarily plant material while they are in their Arctic nesting grounds. They eat mainly green grasses, lichen, sedges and grub for roots. As they migrate south they feed on water plants and waste grains from the year’s harvest.

The bulk of the Ross’ Goose population migrate south from the Northwest Territories of Canada and tend to split over Montana. Part of the group migrates to central California. In recent years, more and more of the geese have moved down the eastern side of the Rockies and into western Nebraska and Kansas. The Missouri River flyways sees the Ross’ Goose, too

Hunting snow geese in this part of the country can be a challenge. The birds tend to feed in different areas each day. Setting up a blind in one place can be done, but you need to have the right spot. Hunters that are more mobile are generally more effective.

Snow geese tend to travel in large flocks, but that doesn’t mean you need lots of decoys. Personally, I think they are a bit decoy shy by this time of the hunting season and smaller spreads or less than 50 decoys may actually be more productive.

Keep an eye on the sky! It won’t be long before we see swarms of these geese passing overhead. Good luck on your hunts this spring! 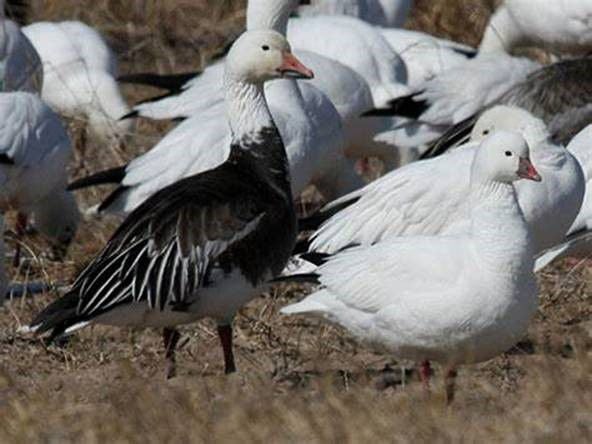 A common white Ross’ Goose with a rare blue phase goose in the picture as well. You have to be in the right place at the right time for this get this photo. Snow geese and the Ross’ Goose will be migrating north from their wintering areas in Texas amd Mexico soon. Don’t put your shotgun away yet!