Weather conditions in the southeastern portion of the country have apparently been good for the appearance of a hairy caterpillar with the unflattering name, the Puss Caterpillar. This caterpillar is the larval stage of the Southern Flannel Moth and at his point in its life cycle it looks like a patch of hair crawling along whatever surface it is on. It is one of the few poisonous caterpillars in North America. Weird, right?

“These caterpillars have a dense covering of fine hairs that range in color from tan to dark brown and gray,” said Nancy Troyano, Ph.D., a board certified entomologist. “They are one of 11 species of this family of moths in North America, and the southern flannel moth caterpillar is the most commonly encountered by humans,” Troyano says.

Fortunately for us, they have not been reported in Nebraska. The main sightings have been in Virginia so far this year. “Puss caterpillars are most commonly found in the southeastern and south central portions of the U.S. They also have been reported as far north as New Jersey and westward into Missouri,” Troyano added. These caterpillars have been documented in Arkansas and Texas. They are very common in Florida and may have their highest numbers in Texas.

The puss caterpillar is one to two inches long and covered in a fine hair that hides hollow venomous spines hidden beneath its wavy hair coat. At the base of each spine is a venom gland.

This is a protective mechanism used to defend against predators that might want to eat them. If handled by humans, or just brushing up against one of these caterpillars by accident, the poisonous spines pierce the skin and hold in place via microscopic barbs. The spines break off and release a toxin that can cause a severe and painful reaction.

The pain from touching one of these caterpillars is often described as an immediate burning sensation where the spine contacted the skin. There is localized swelling, red, blotching appearance of the skin, nausea, vomiting, muscle cramps, swollen glands or fever depending on how allergic the person is to the venom.

I grew up along the Gulf of Mexico and spent a lot of time in the ocean. The effect of the puss caterpillar reminds me of the sting you can get from jelly fish or a sea anemone.

In August, a Florida woman made contact with one of these caterpillars after an outdoor workout. She said it caused intense pain and painful red welts. She also reported that it took hours for the pain to ease.

A Virginia woman crossed paths with one of these caterpillars last month. It was on her vehicle’s door and she brushed against it with her leg as she was opening the door. “It felt exactly like a scorching-hot knife passing through the outside of my calf,” said Crystal Gaston. “Before I looked down to see where it came from, I thought I was going to see a big piece of metal, super sharp, sticking out from my car.” It took three days before the pain subsided.

So why are these poisonous caterpillars showing up now? It is fall, and as part of this caterpillar’s life cycle, it is feeding heavily on leaves, preferring elm and oak leaves. They are getting ready to undergo their last transformation. They drop to the ground and change their physical appearance. This is the period in which most people see them. It is known as their wandering stage when they’re getting ready to make the transition into the Southern Flannel Moth.

The advice of all experts is to not touch the creature and maintain a safe distance if observing or taking pictures. If you do make contact and are stung, thoroughly rinse the area with soap and water and apply ice. You can also try using adhesive tape on the area of the sting. The tape may stick to any spines that hold the venom still protruding from the surface of the skin and when you remove the tape it may pull them out. If the pain becomes severe it is suggested you head to the emergency room.

This reminds me of the Giant Hogweed plant I wrote about back in 2018. We live in a strange world. 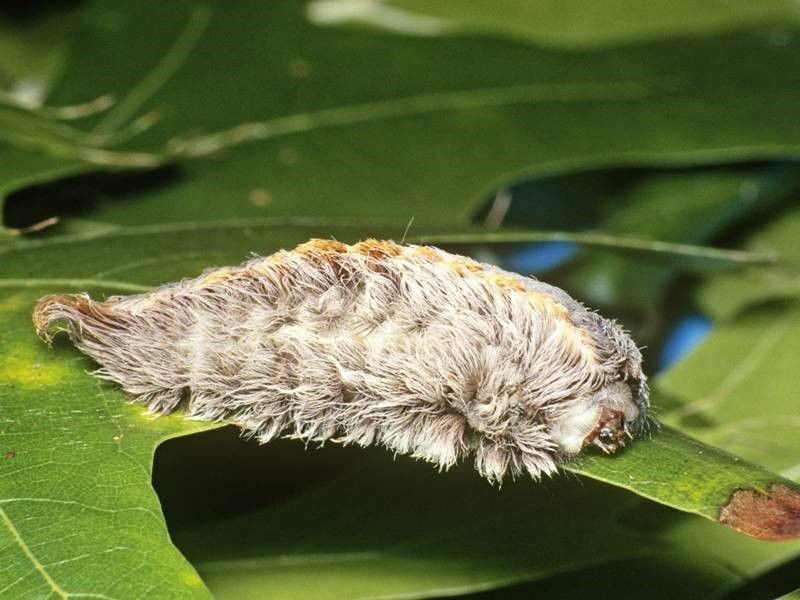 The puss caterpillar looks like a clump of hair crawling along, but is it also poisonous and can inflect a painful sting. Fortunately there are none yet reported in Nebraska, but states south and east of us do have to contend with them. One of Natures oddities with a real bite!