Why are eagles so revered?
View Comments
Share this
{{featured_button_text}}
lnichols

Have you noticed that there are a few more bald eagles in the region? That is a good sign for waterfowl hunters. Eagles follow the flocks as they migrate south, so when you begin to see more eagles, ducks and geese are moving into the area and hunting is about to pick up! This is the best time of the year to see eagles, so get off the couch and out of the house! Eagles can often be seen along rivers, streams and reservoirs…anywhere you can find open water where waterfowl gather and fish are present. Two of my favorite places to look for eagles this time of year are along the Missouri River between Brownsville and Rulo and to the west of town in the Rainwater Basin area.

Throughout history, eagles have been revered and quite often seen as a harbinger of a prophecy or the foretelling of something to be. In our case, eagle tells us when waterfowl are entering the region. Why do we place such a degree of importance on eagles and how long has this belief been going on?

Eagles are one of the most ancient symbols of humanity. The Greeks and the Persians considered the bird a symbol of elevation and of spirit associated with the supreme sky-gods. For the Greeks, the eagle was the emblem of Zeus. In ancient Persia it symbolized the victory of the Persians over the Medes, in which an eagle was seen before the battle and thought to be an omen by flying over the battlefield.

Eagles do most of their flying, hunting, fishing and living during daytime hours. Their life is associated with light and with the elements of fire and water. Eagles are characterized by their seemingly fearless flight and speed.

The Druids regarded the eagle as the symbol of the almighty who watches from higher spiritual states. In other cultures eagles have been associated with thunder and lightning, and associated with Gods of creation. They were seen as representing hereditary, nobility, power and war. Like the lion on earth, the eagle is the king of the sky. It has been believed by some to be able to fly between the real and spirit worlds to regenerate and guides souls.

In ancient India, it is known as Garuda, a huge mythical bird, a solar bird, mentioned in the Ramayana as the God Vishnu’s steed, Vishnu being the Second Person of the Indian trinity composed of Brahmâ, Vishnu and Shiva.

In Rome, the eagle roosts on Jupiter’s scepter and makes his will known to human beings. On coins, it appears as the emblematic symbol of the legions and the power of the Empire.

In the Bible, the eagle is associated with St. John the Evangelist because of his direct perception of the inspiring light of God. During the Crusades, Christians incorporated into the coat of arms of European kings and emperors.

In early Mexican culture, the eagle is associated with the jaguar, and a bird-god representing the sky and light. It was the symbol of strength to the elite of Aztec protectors, the Eagle Warriors. The Aztec king dressed in capes of eagle feathers and feathers also decorated his ceremonial throne.

Even the United States of America adopted the bald eagle as it’s official symbol because they are unique to North America, majestic, bold, and a symbol of strength and determination. In the U.S. culture, there is no spiritualism associated with the eagle. It simply signifies courage, wisdom, and strength, which is very similar to what he founders of the United States envisioned with the eagle symbol.

In an odd twist of fate, the Nazi’s used the symbol of the eagle for the same purpose in World War II. They even borrowed a theme from earlier Germanic tribes and used a symbol of a two-headed eagle to strengthening the representation and invoke an image of duplication of its powers.

Today we probably associate the eagle more readily with Native American cultures. Native Americans consider the bald eagle and the golden eagle to be sacred. Because eagles were thought to be the highest flying of birds, they were seen to be nearer to the Creator. As such, eagles were believed to carry prayers to the Great Spirit and had a special connection with visions. Eagles were thought to be the physical form of a spirit helper and guide. The symbol of an eagle signified courage, wisdom, and strength. Of all the birds, the eagle is the most sacred of birds among most Native American tribes.

To many Native American cultures, an eagle feather is as revered as much as the bird itself. Eagle feathers symbolize trust, honor, strength, wisdom, power, and freedom. Of all the birds, the eagle is considered the most important. Eagle feathers are used in pow-wows and dances. Magnificent headdresses are made of eagle feathers and each feather on the headdress represents an honor or incident of bravery related to the wearer.

Within the Cherokee Nation, the eagle feather is used in ceremonial healings and purification purposes. The practice used for these purposes is called Eagle Medicine. The eagle’s symbolism reminds us to strive to achieve a certain mind set through diligence, understanding, awareness, and personal visions. The eagle feather is also used to adorn the sacred pipe because it is a symbol of the Great Spirit who is above all and from whom all strength and power flows.

When a feather falls to the earth, it is believed to carry all the energy of the bird it came from, and it is perceived as a gift from the sky, the sea, and the trees. Feathers may arrive unexpectedly, but not without a purpose. Eagle feathers are held in high regard and are handled with great care. If an eagle feather is dropped during a dance, a special ceremony is performed before picking it up again.

Remember that the eagle is a highly protected bird under U.S. law. United States law recognizes the unique significance of eagle feathers in Native American culture, religion, and special exceptions are made to allow Native Americans to possess, pass down, gift, and acquire eagle feathers within specific conditions. Unless you are a registered member of a Native American tribe, possession of an eagle feather or any other part of the bird is illegal.

I hope this gives you some new appreciation for the eagle and you remember some of this the next time you see one of these magnificent birds.

Don’t put your deer hunting gear away yet! 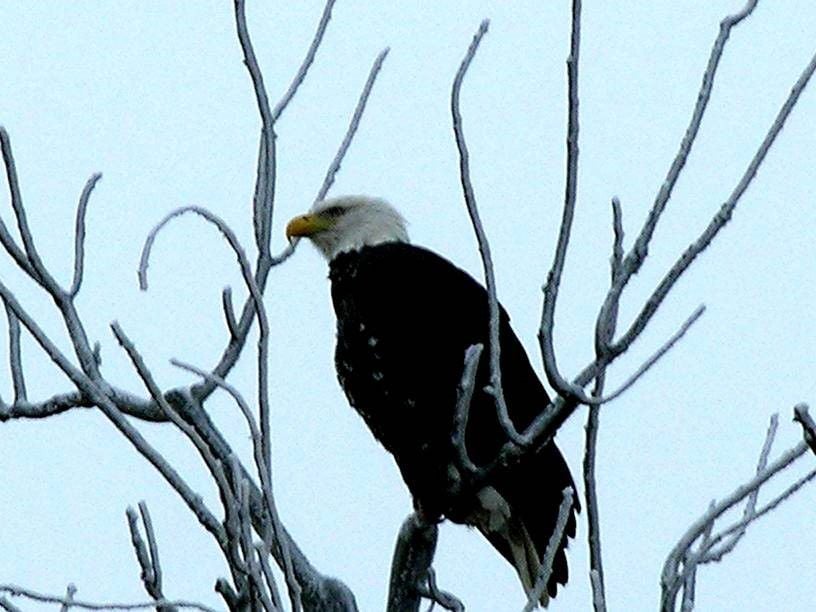 A bald eagle seems to exhibits power and strength, and cultures throughout history have felt the eagle had all of these powers and more! Winter is when we see the most eagles in Nebraska because they follow migrating waterfowl. I found this eagle watching over the Missouri River, at Indian Cave State Park. I’m sure he was keeping tabs on all the ducks and geese in the area.